Our school got an iPad Cart. Holds 30 iPads (though we got only 20) and will charge/sync all of them at the same time. It’s much better than charge/sync one by one, but well… not that impressed.

iPad is something that designed to used by one person. It’s private device, and get personalized by user. Even though iPad can be a great tool in classroom and business environment, when it comes to the management of them they are not the easiest set of the technology. The cart will physically connect all the iPads to one computer and will charge them. However, the initial setup needs to be done one by one, especially the iPads we got has only iOS 4.3, we needed to upgrade them to iOS 5, which cannot be done all at the same time.

My honest feeling about this iPad Cart? well… it’s still under development. as I said, iPad is personal device, and original concept is not designed around the use in the school environment. However, the demand from the users, it’s been forced to fit the needs. it’s almost there, but not quite.
you can use the knife to turn flat head screws, but not as easy as using screw driver. eventually iPad will turn into swiss-army-knife, which can satisfy both demands in personal user and corporate users.

until then… well, we’ll work around and look for the best working solutions… 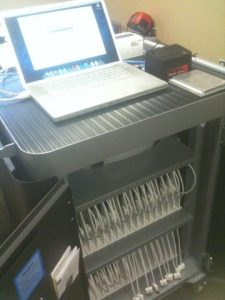