It is one of my favorite dish, which is easy yet look fancy.
This time, because of what I had (or the lack thereof), I used Shrimp instead of Chicken.
(I thought I had some frozen chicken, but my freezer ate it…) 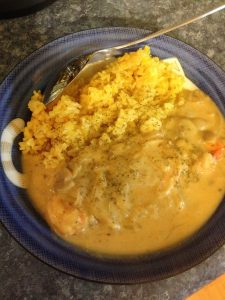 Anyhow, I will write this recipe for Chicken, but with some comment for adjustment when you use shrimp.

It is very creamy, yet paprika has distinctive kick. The lemon pulls all the flavors together, and even thought it’s fairly simple dish, it has very sophisticated flavor. I personally like the chicken version better, but shrimp version is also very good. Try and you’ll love it!