Just dropped off my RX-8 at Duke Energy Center for Cincinnati Auto Expo.

Cincinnati SCCA is holding a booth to promote our club, and I volunteered to have my car at the booth for display.
The SCCA booth is in between Lincoln and BMW, somewhat a tiny space, but if anyone have chance visiting Auto Expo, please stop by at SCCA Booth. Expo is open to public from Thursday to Sunday. You can get a ticket at the entrance, or from your local Kroger. 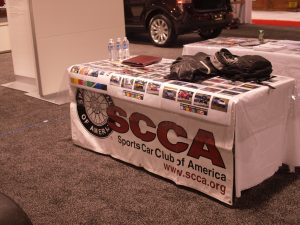 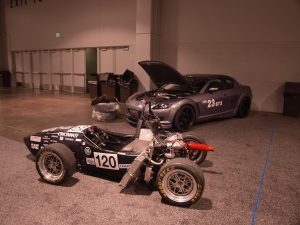 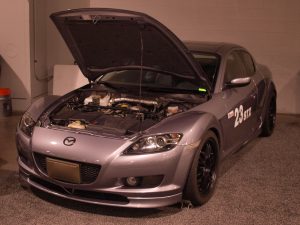 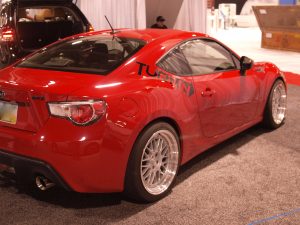 Autocross is a form of motorsports that emphasizes safe competition and active participation. An autocross is a timed competition in which drivers navigate one at a time through a defined course on either a sealed or an unsealed surface. Autocross differs from road racing and oval racing in that generally there is only one car on the track, racing against the clock rather than other cars. As an entry-level motorsport it provides a stepping stone for drivers looking to move into other more competitive and possibly expensive forms of racing (such as rallying and circuit racing).
Autocross courses are typically one to two kilometres long and tend to place demands on car handling and driver skill rather than on engine power and outright speed. Courses may be temporary and marked by traffic cones or be permanent tracks with approval by a motorsport body.
Events typically have many classes that allow almost any vehicle, from economy sedans to purpose-built racing cars, to compete. Due to the nature of a typical track, speeds can be slower when compared to other forms of motorsports, usually not exceeding highway speeds, but the activity level (measured in discrete turns per minute) can be higher than even Formula One due to the large number of elements packed into each course.[1]

The other one is Road Racing

Road racing is a general term used in North America for most forms of motor racing held on paved, purpose-built race tracks (i.e. “road courses”), as opposed to oval tracks and off-road racing. Temporary facilities built on paved airport runways and closed-off public roads (such as street circuits) are also usually included in the definition.
Road racing is occasionally conducted using the infield and oval portions of tracks making a “roval”, such as the 24 Hours of Daytona.

For more informations, please stop by at the SCCA Booth at the Auto Expo, or visit Cincinnati SCCA Web Site.