One of the popular lunch for middle school and high school student at a school cafe is a sandwich called “Yakisoba Pan (焼きそばパン)”, Yakisoba is a type of stir fried noodle, and Pan means bread (originally from Portuguese Pao, meaning bread).

The other day, I was trying to think what to pack for lunch next day, looking at the almost empty fridge with just bean sprout and some cilantro, one onion on a countertop, and semi-freezer-burned chicken, and decided to make a Yakisoba Pan. My plan was to make yakisoba, then stop by at Kroger to buy bread on my way to pickup my wife at school. Long story short, they didn’t have uncut hoagie bun (it needs to be cut like a hotdog bun, but in hoagie size), so I grabbed Indian Naan that was on sale.. 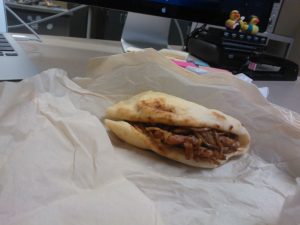 Anyhow, here’s the Recipe. Remember, this is not a traditional Yakisoba or Yakisoba Pan. other than ingredients, most steps are pretty much the same, so I’ll have the real ingredients in (parentheses).