has been a great companion to our house for just about 3 years. About a couple months ago, our little workaholic robot start doing backward circle dance (the Youtube link is not my video… ), indicating bad bumper sensor. I bought new IR emitter and receiver but it did not fix the problem… my poor soldering skill may be the cause…

Anyhow, considering buying a whole new bumper sensor unit will cost $70, we decided to move on to a newer robot. Roomba was still in my option, especially since i’ve already got accessories such as virtual wall and charger. They do have newer series, but our model is still currently being sold, and considering all the features we need, I didn’t mind getting the same model Roomba 560

again. When we first start looking for robotic vacuum, the only useable choice was iRobot Roomba, it was already on its second generation series, and clearly one step ahead of any other robotic vacuums.

Now, in 2012, iRobot is no longer the only robotic vacuum company. While iRobot concentrated on their other house work robots (such as gutter cleaner, floor washer, heavy duty garage vacuum, etc), there another serious contender, Neato Robotics. After few weeks of searching around, reading review, comparing prices, we ended up going with Neato XV-11

, and their original version went for a huge discount. The deciding factor was that I could buy Upgrade Kit

that will make XV-11 to XV-21 equivalent, and even after upgrading, it will still be cheaper than buying XV-21 (even with some discount at local stores!).

The biggest differences between Roomba and Neato is how they cover the area.
Roomba goes random path. From its docking station, it will start vacuuming in random path, until it hits some object, then it will randomly decide what to do next, turn around and go back either right or left, or follow the object’s edge. it will cover the area by multiple path, and eventually it will clean the entire room. Roomba does have some guiding by virtual walls and base station, but it’s minimum.

On the other hand, Neato actually covers the area more like human do. It can “see” the room by using laser, so it will map the room it need to clean, then going in rows. It will “figure out” the doors, so clean one room then move to next room, come back to the charge station once it’s out of battery (or done cleaning), then go back to where it left out and start cleaning again.

Due to such a great price (I guess…) the XV-11 was back ordered, and after a couple weeks of waiting, it finally arrived. We charged it up and then let it go for it’s first endeavor. 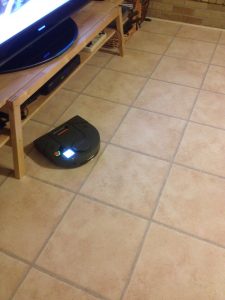 The first impression was… loud. When it start, it almost sounds like an airplane takes off… Though I knew it from reviews online, but it is quite noisy. Not as bad was larger upright vacuum cleaners, but for our us who used to the Roomba’s quiet sound, it felt really loud. However, considering the whole point of robotic vacuum is “so that you don’t have to”, it won’t be any issue once we are done watching the robot how it cleans, and following from room to room… (yeah, I know it kinda defeat the purpose… )

Second, it was quite amazing to see that robot can see the room, even though I knew it from the video and reviews online. Once I press the start button, Neato depart from the charging station, then “look around” and figure out what is the room shape it’s in. then it went to the end of the room, then start cleaning along the edge, then in rows. Because it passes each path only once, it finishes cleaning each room fairly quickly. Which also means covers more rooms in once charge. It moves into kitchen, foyer, living room, and then, it decided to come back to charging station. It takes 2 to 3 hours, and once it finish charging, it went back to living room. Finish off the living room, then come back to the family room where it started (this room located right around the middle of the house), and then head down to the bedrooms area. Very fascinating to watch how it navigate through different rooms, and each time come to the doorway, Neato stops and then think, where it should go next.

Because our house is old style with a lot of doorways, Roomba needed to be restricted (by using virtual wall) in only couple rooms at a time, which means it couldn’t fully utilize the scheduling feature, and needed to start manually before we leave, and then move to another room next morning. (not much of work, and didn’t bother us much though). Now, this new Neato “suppose” to be able to navigate itself using the map it create as it go through rooms, we “suppose” to be able to fully utilize the scheduling.
set it to clean every day while we are gone, and will cover entire house.

Well, the effectiveness of scheduling only shows after a week or so using.. so will report again!