So, I got a call from a friend, and she said her car does not start. Knowing her car, the first thing I thought was a battery, then after talking to her, I thought of the starter. Since she was in Cincinnati, and her car was getting towed to a shop, I told her to get a diagnostics and get the estimate.

The diagnostics came back as a bad starter, and the estimate was close to $400. Her choice was obvious, comparing that to DIY with AutoZone Starter for $120 (or even for cheaper if you buy them online

), and luckily she had a free towing back to town… I told her to tow the car to my place, and I was getting my camera ready to make this DIY.

At 6:00 PM towing truck brought her car to my driveway. It was already starting to get dark, but needed to go to AutoZone to pick up the new starter. And at this point, I was already totally forgot about the DIY and taking pictures for this…

Her car is 2002 Toyota Camry, which has the same engine as my previous car, 2004 Solara, and I’m kind of familiar with her engine bay. Also since I forgot to take ANY pictures for this DIY, I’m using a couple pictures of my Solara, just to show the starter locations. 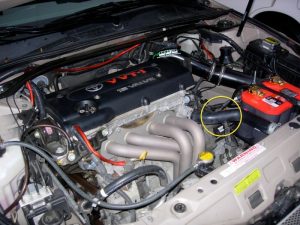 Step by Step Instructions
The bolt size may be wrong.. it’s from my memory and I’m not known for a strong memory…

by the time we finished putting everything away, washing my hand, and called my wife, it was just passed 7:30. Considering the trip to the AutoZone, I think the actual time it took us was at most 1 hour. considering the work done out in dark driveway, it was not that bad.

Wish I remembered to take pictures.. but well, it should be straight forward enough.