one of the wheels I have, CE28, came in offset which is not quite ideal.
SCCA Solo Street Class allows +/- 6mm from the factory wheel offset. 99 Miata came with +40, and the CE28 is +45… I decided to give a 10mm wheel spacer a try, and that will need me to have longer wheel stud. (or I could just keep running SSR which is +38…)

Here is a solution I stumble upon while back, and works great, without damaging wheel bearing.
To use ball joint separator. 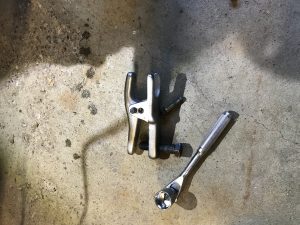 I have a KD tool’s one, but it looks just like this ABN one I found on Amazon. I believe I paid something similar to that or a little cheaper, but it was 5 years ago… (Or if you want to get a good brand name Gearwrench has one for not much more)

I used this tool on total of 4 axles, and I do see wear, but it’s a cheap tool, and considering how often I would replace studs, it’s not a huge investment.

Once you remove the brake caliper and then the rotor, place ball joint separator so that the open end is on the back, around the knurl (? the back side) of the wheel stud, and closed side is on wheel side of the wheel stud.

Then slowly (I use hand tool on this one, not the impact), turn the bolt, to press out the wheel stud. It is pretty easy and does not take much effort.

Once the old stud is out, flip the ball joint separator, so that the open end is facing frong, around the wheel stud, and the closed end is on knurl, so that you can press it in. This takes a little more caution, so that the press is centered on back of the stud. otherwise, you might start pressing the stud in angle… Make sure to press all the way and that does take some effort. (Not sure if this would be better than using washer/lug nut method…)

Anyhow, if you ever need to replace wheel stud, I highly recommend this method over pounding the stud out.